How Addmotor Deals with The E-Bike Shortage?

How Addmotor Deals with The E-Bike Shortage?

There is some news about the shortage of electric bicycle parts, such as battery shortage and price increase, which has caused long delays in transportation. Today, Addmotor will explain why this happens，And what's next for Addmotor in 2021.
By Muriel | 03 June 2021 | 2 Comments Share：

Electric bikes have become the most popular thing in 2020 and it’s getting an explosive increase in the e-bike market in 2021. There’s some news about the lack of electric bikes parts like the battery shortage and price increases, which causes a long-time delay shipment. Due to the increasing demand for electric bikes, there's the delayed production of electric bike parts. Therefore, it causes the prices to increase in the whole e-bike market.
Today, Addmotor is going to explain why this is happening and what’s the next step of Addmotor in 2021. Spoiler alert, if you're keeping your eyes on an Addmotor electric bike, don't hesitate to purchase it before the price adjustment.

What information did you gain in the picture? The long waiting time of each electric bike part, of course. Some parts cost even more than 300 days to make. 2020, thousands of companies have shut down and workers have lost their job which leads to the lack of workers to support the huge production chain because of COVID 19. In the same year, the 2020 United States presidential election has started and brings a great many protests by the US people. It means there will be a lack of workers in each area production. Although there's a long time waiting for electric bikes parts now, Addmotor still provides enough inventory for our customers in the huge effect of COVID 19 and during the United States presidential election.

In this circumstance, all the price of the raw material has risen 10%-15%, such as the material like Aluminum, iron. It also forces the worker's salary to increase. All the above reasons cause the delay of the production.
So how did Addmotor managed to provide enough inventory and stocks and shorten the wait time for your orders? It's because Addmotor has put in a lot of effort and money in the whole process, the entire production chain. Addmotor also made an important decision in time while these happening. Addmotor has started their goods of all the accessories part purchased much earlier which is stocking all the parts in 180-250 days in advance. That's why Addmotor is able to set the pace in the whole e-bike market.

THE BIG PROBLEM: BATTERIES SHORTAGES
Well, there's no doubt that the battery is the heart of electric bikes. None of the electric bikes could ride without a battery. The most difficult part of an electric bike in 2021 is that a large amount of demand for the battery is overload than the capable of producing. Especially Tesla requires the huge needs of the battery. It brings about Panasonic and Samsung to delay the production time in 2021. There’s a small quantity of the raw material and the price has doubled as well. For all of the above reasons, the electric bike market is resulting in a shortage because of the out-of-stock battery. However, Addmotor has changed the entire out-of-stock situation and consistently provides enough stock for our customers.

UNAVOIDABLE PRICE INCREASE—SHIPPING FEE
The next hold-up reason is shipping. The parts of electric bikes are commonly imported from overseas. When an electric bike 80% assembly is finished, it will be shipped to the United States. And the electric bike will ship to customers in the US warehouse. In this process, there's a major problem. The container of shipment is urgently needed. It means plenty of electric bike companies rush to get the container that resulting in the price of ocean freight has increased 5-6 times. And the price will keep growing consistently in the future. Simultaneously, the express fee has increased 30% in 2021 as well.

COMPETITOR'S DOWNFALL
Back in 2021, today. Let's take a look at the reality of the electric bike market. You can find that except the Addmotor Electric Bikes, there're lots of electric bike companies that have their e-bike shipping delayed by at least a month or more than 3 months. 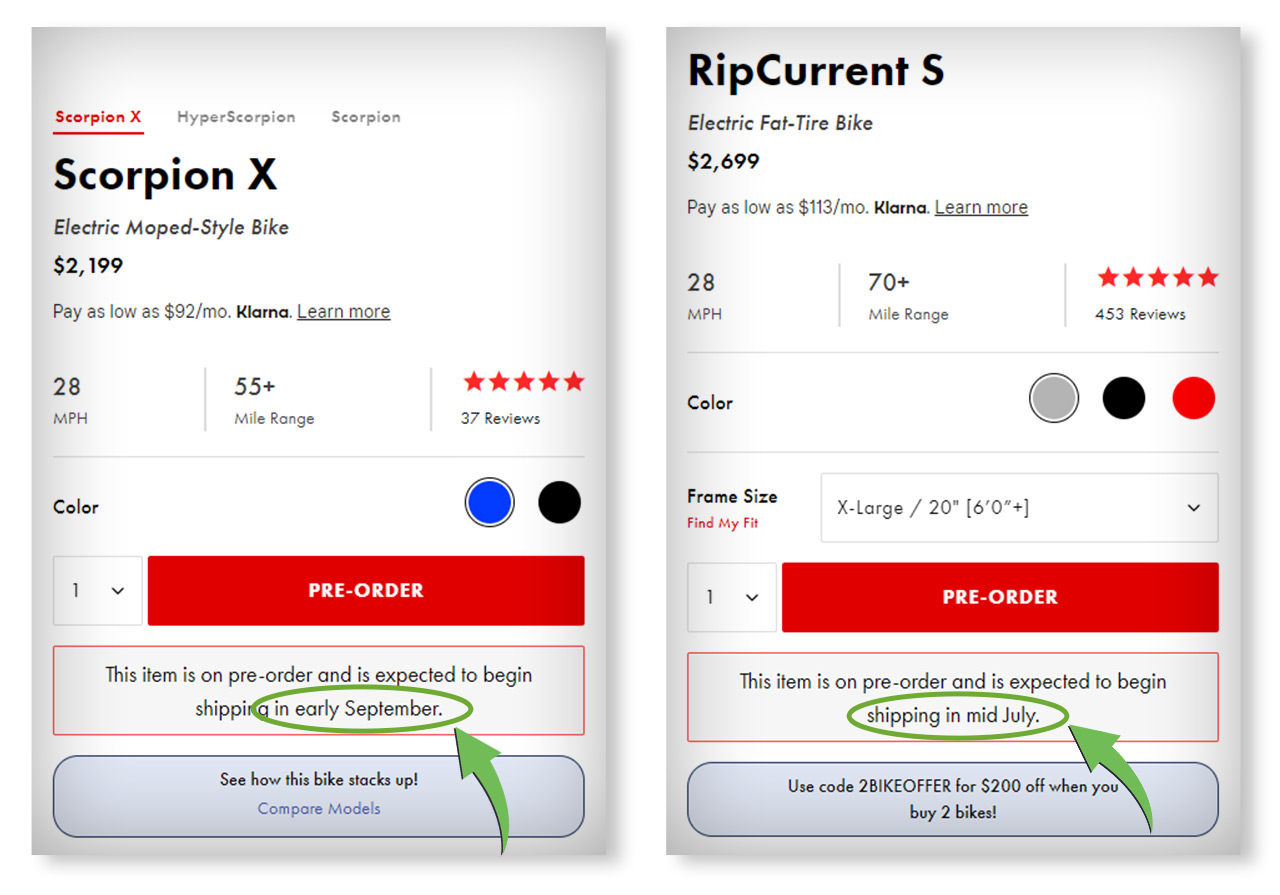 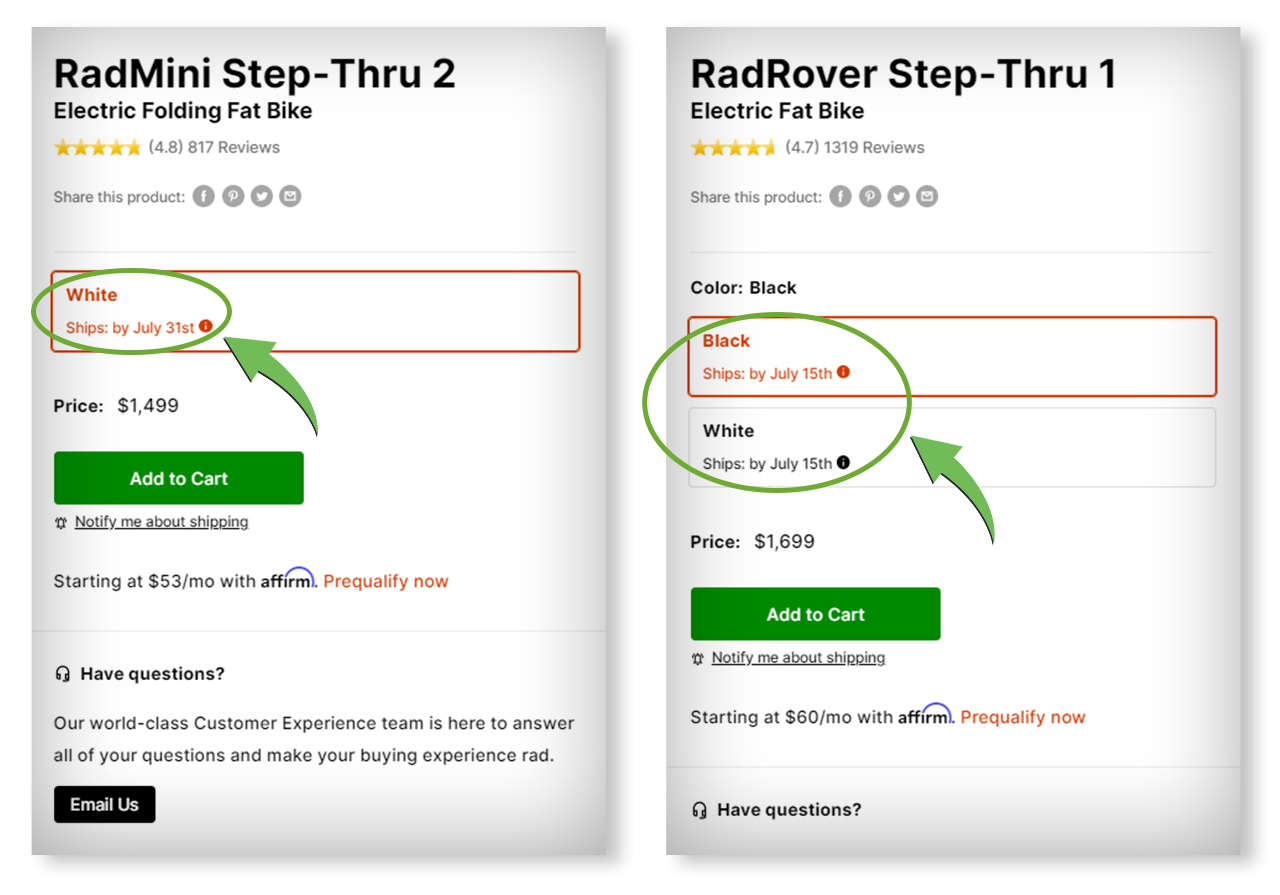 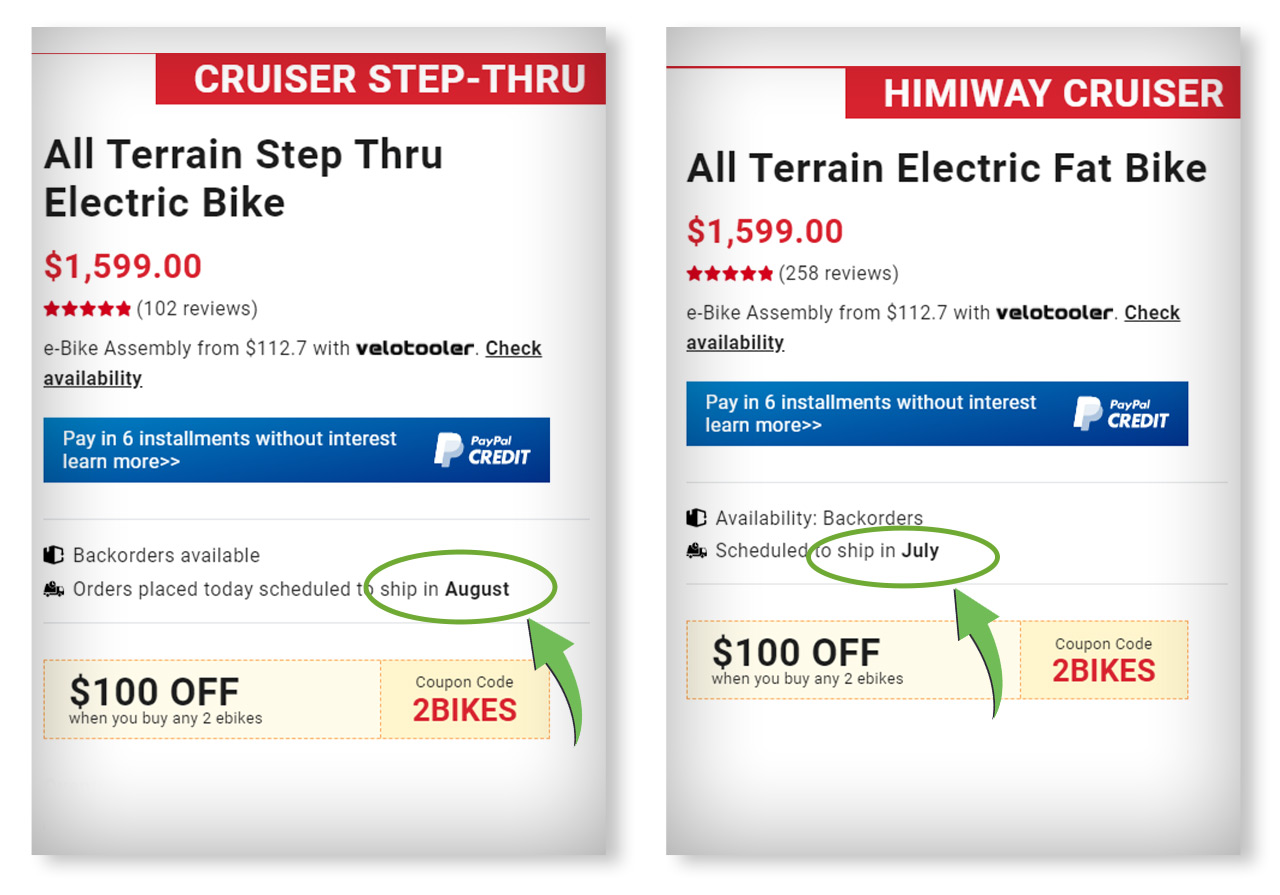 On the opposite, Addmotor offers a variety of options. We have various colors of unique styles of electric bikes for you. Almost all of the restock will keep in about 1 month. In 2021, Addmotor has upgraded lots of electric bikes like more colors, battery upgraded...
If you're looking for cruiser electric bikes, you definitely should check out the hottest model  M-66 R7. It's in stock and ready to ship! 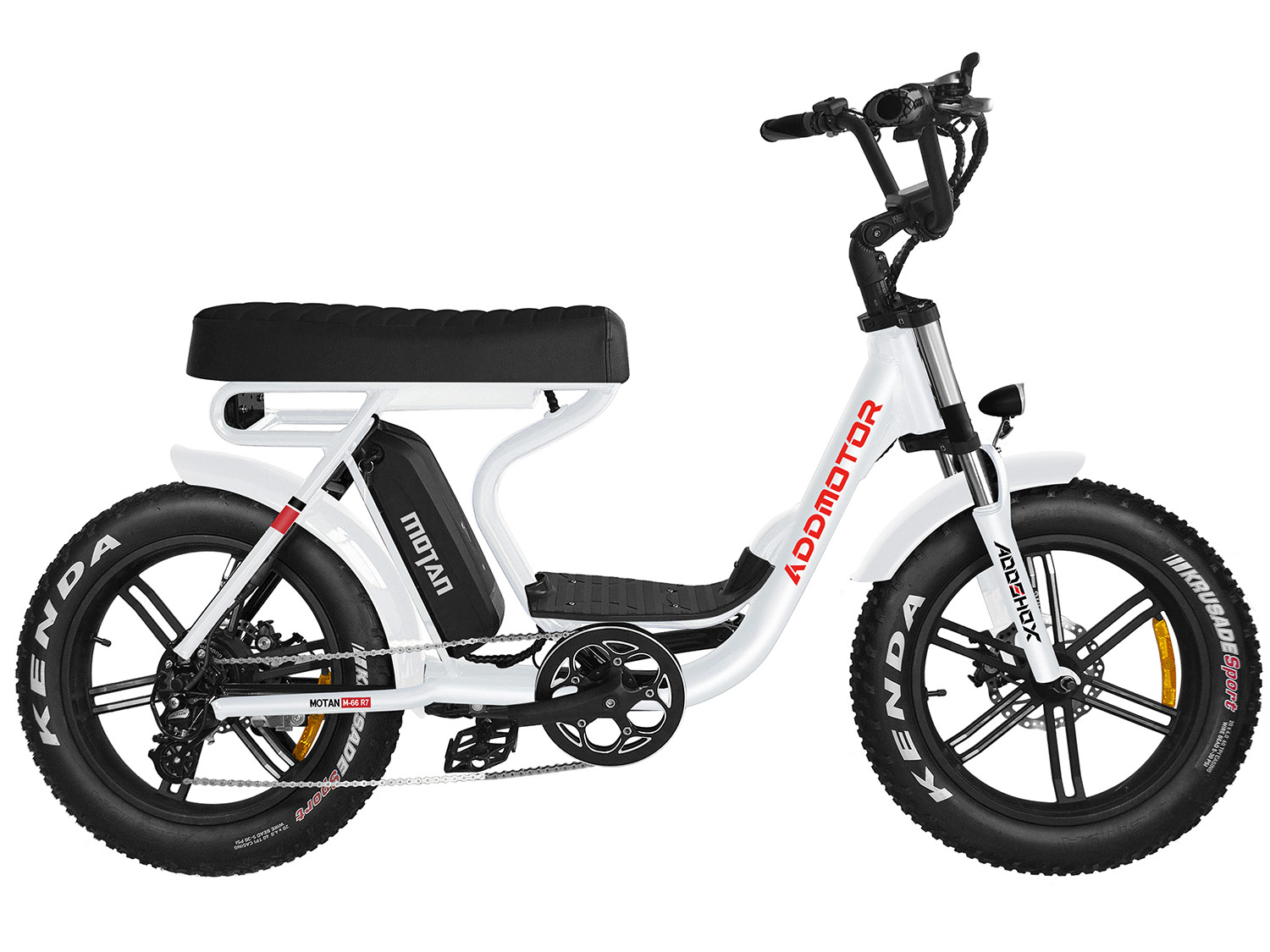 Step-Thru 750W Electric Fat Bike: MOTAN M-66 R7
MOTAN M-66 R7 is truly a different style of electric bike you’ve seen on the road. You can’t put into words how much fun this bike is.
It’s a very unique different style of electric bike you’ve never seen. Combined with a 1970’s retro impressive-look and step-thru frame, the M-66 R7 is the most distinctive e-bike on the market. Strong, solid, practical.
The front-down frame design is a small platform pedal that offers you multiple uses such as a moped, placing a box package, using as a footboard, or whatever you can think of. The MOTAN M-66 R7 should be the best choice if you like a traditional cruiser bike that features a 750W rear-mounted integrated motor, a large comfortable banana seat enough to settle two.

LAST WORDS
Addmotor serves our customers attentively. But due to plenty of pressure, we have to make this important decision. And to a better upgraded of all Addmotor electric bikes, we're here to announce that the price adjustment of partial electric bikes will most likely be on July 10th (Price adjustment is based on the Addmotor official announcement).
Hope you could understand and support the Addmotor team as always. 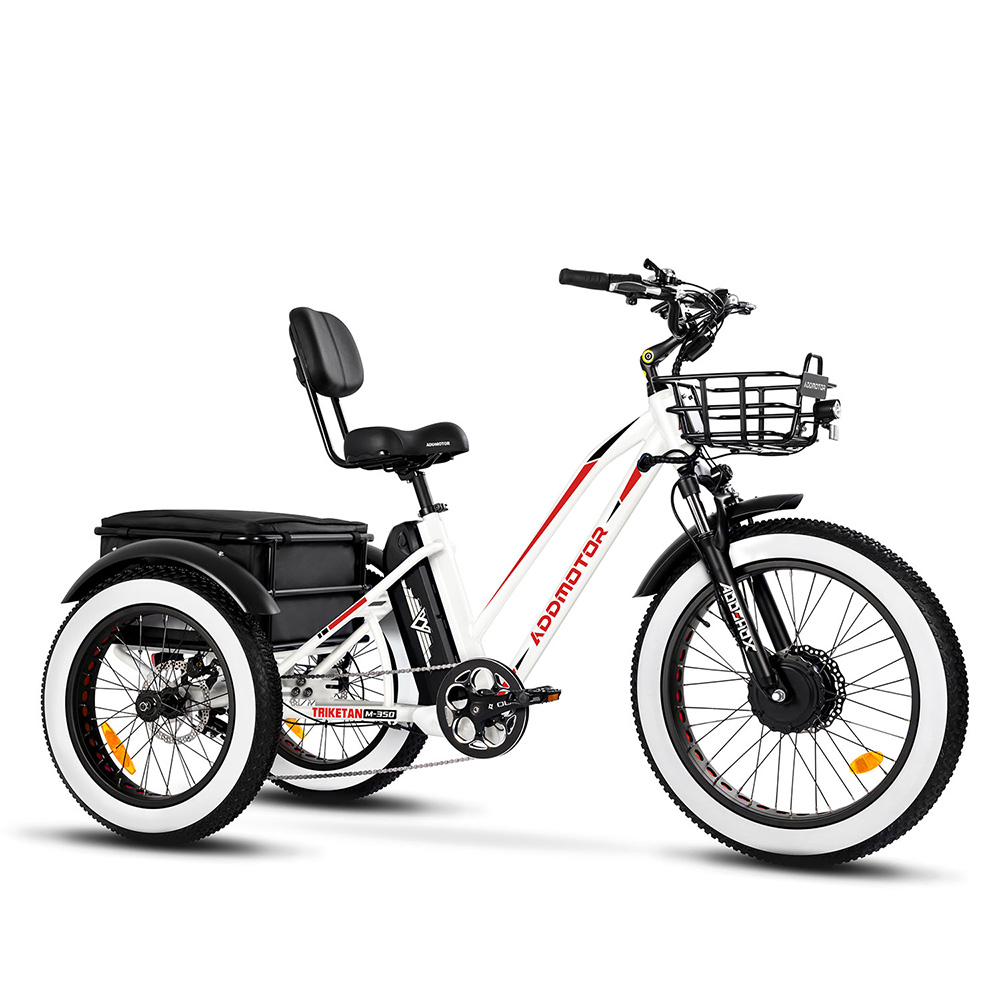 How E-Trikes Offer the Most Comfortable Riding Experience