When you ride an electric bike, have you ever thought about what a great invention this is? How did its creators do it?
By Addmotor | 23 July 2021 | 0 Comments Share：
"In special times, compared to buses and subways, I still feel safer to ride a bicycle."

During the pandemic, in addition to masks and hand sanitizers, bicycles were sold out of stock in the United States. According to data from the NPD Group, a market consulting firm, in March this year, the sales of bicycles, equipment, and maintenance services in the United States almost doubled compared with the same period last year. Among those, the sales of electric bicycles increased by 85%, and the search for “electric bicycles” on Google also soared during the pandemic.

It is not difficult to find that the popularity of electric vehicles and electric bicycles is the inevitable result of this era of pursuit of environmental protection and convenience. So, when you ride an electric bicycle, have you ever thought about what a great invention this is? How did its creators do it? Today, we will talk about the origin of electric bicycles.
Electric bicycles are light vehicles that use batteries as the main energy source. They are similar in appearance to bicycles or motorcycles. They are a kind of motorized bicycle. Some types of bicycles also have pedals, chain and brake system can use manpower as auxiliary power. Electric bicycles are generally composed of electrical systems, control systems, decorative parts, body parts, and vehicle accessories. The core components are the frame, battery, motor, controller, and charger.

Speaking of electric bicycles, the first thing we think of is the motor. The origin of the motor can be traced back to 1828. The Hungarian inventor and engineer Ányos Jedlik, the father of the DC motor, invented the electromagnetic rotating mobile device in the laboratory. Then in 1834, Thomas Davenport produced the first electric car driven by a DC motor, which promoted the development of the entire electric vehicle industry.

The very first electric bicycles were documented in the 1880s and 1890s in the patent offices in both France and the United States. At the time of the electrical revolution, inventors headed by Edison applied electricity to all areas of social life. American engineer Ogden Bolton invented the direct-drive hub electric bicycle, and he became the first to obtain the person who patented a battery-powered bicycle. This is a 10V/100A, single-speed, an electric bicycle with a DC hub motor. 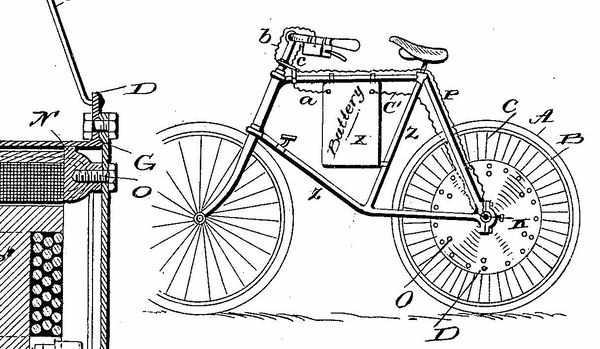 Ogden Bolton was not the only inventor experimenting with electric bicycles at that time. Inventors in the West at the same time were all contributing towards the perfection of electric bicycles. In 1897, the inventor Hosea W. Libbey designed an electric bicycle with a central motor. This electric bike had no pedals and is driven by a connecting rod. This model follows a similar design and operating principles to the mid-drive motors we see on some bicycles today. 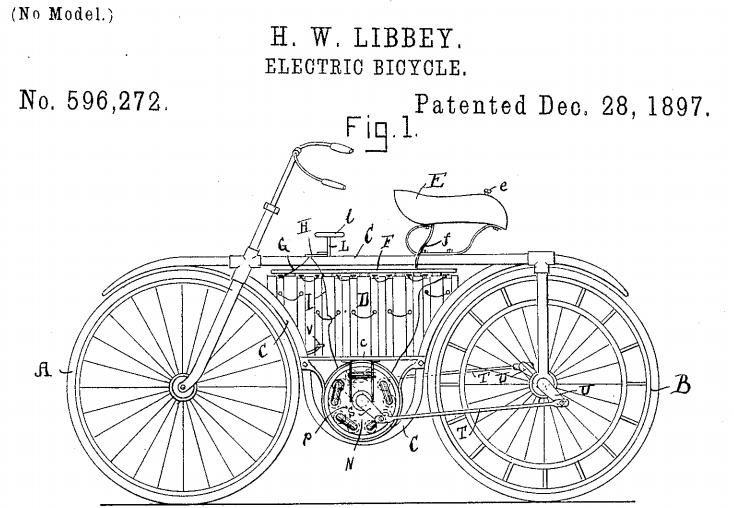 In November of the same year, a tandem electric bicycle named Humber was displayed at the Stanley Exhibition, which was made by Frenchmen Clerc and Pingault. This two-person electric bicycle ran a kilometer of road in just 57 seconds, with an average speed of 63km/h. In 1899, John Schnepf registered a rear-wheel friction drive motor. This design concept is still alive in the modification market today. More than a hundred years later on February 1, 1899, Albert Hansen submitted a patent for an electric bicycle to the US Patent Office. The electric bicycle’s motor passes through a fixed base. The upper is installed at the bottom of the front triangle, and the battery is hung under the upper tube. The kinetic energy output by the motor is transmitted through a two-stage speed reduction and finally acts on the large flywheel on the left side of the rear wheel, thereby driving the rear wheel to rotate. On the right side, the traditional human-driven components are also completely retained, which means that even if there is no electricity, it can still pedal forward like an ordinary bicycle.

By the middle of the 20th century, Hosea W. Libbey combined the "booster" battery and dual motors to form this bicycle called "Libbey". The design concept of Libby bicycles was perfect, which became part of the revival of booster bicycles in the 1990s. At the same time, electric bicycles began to experience the earliest mass production. Europe was one of the first places to see these early adoptions, with higher production levels and more use.  Over time, Japanese technology and manufacturing entered the field of electric bicycles with Panasonic in 1975 and Sanyo Enacle in 1989. In 1989, one of the most important innovations was created in the form of the first "Pedelec" or pedal electric bicycle (now called pedal assist), in which when the bicycle records any pedal action, it triggers the motor power as an assist. No Like all previous models, the throttle mechanism is used to control the motor, which allows the rider to use an electric bicycle, which is not much different from the way of riding a normal bicycle.